The Navigation Officer is rushed to hospital for brain surgery and his usual doctor is horrified. ‘Jim’, he exclaims, ‘you’ve got to let me go in there. Don’t leave him in the hands of twentieth century medicine’.

In the film Star Trek IV Dr. McCoy goes on to cure Chekov with ease. However, perhaps we should bear his remark in mind as we look back at some of the treatments of the past in Oxfordshire’s hospitals.

In earlier years the usual treatment of the mentally ill was the use of cells, chains and whips. By 1844 the Commissioners in Lunacy were able to publish a report which compared ‘the old system of keeping patients bound hand and foot in cells often dark, loathsome and disgusting’ with ‘the present humane method’. Traditional methods were beginning to be replaced. For example, when the Committee of the Warneford Hospital was sent a sketch of a ‘whirling chair’, a common device which treated the patient by spinning the chair rapidly, it was decided not to use it. 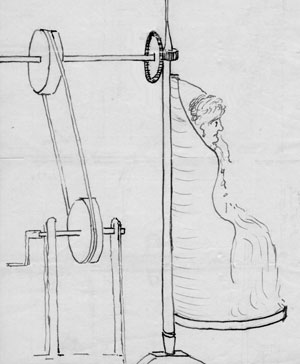 The concept of what was called ‘moral management’ was taking over, the first emphasis being on the removal of chains and strait jackets. In the 1820s and 1830s the Warneford Hospital made several purchases of handcuffs, hobbles, restraining belts and strait jackets to use for violent patients. By the 1880s restraint was being used differently. When a Mrs Gibson attacked her nurses in 1883 she was placed in a padded room. When she tried to injure herself ‘her hands were therefore restrained by jacket’. A week later ‘canvas gloves were put on to prevent her injuring herself’.

The reduction of restraint was only one of the reforms in the treatment of mental illness. As the nineteenth century progressed great emphasis was placed on exercise, open air, pleasant surroundings and amusements. The appointment of Chaplains was advocated, the Commissioners observing that ‘independently of other considerations, the regular attendance of patients at religious services has the effect of inducing habits of composure and efforts to preserve self-command’.

The mentally ill were treated with both narcotic drugs and stimulants. Dr. Wintle of the Warneford was a great believer in the use of opium to subdue excitement and procure sleep: ‘I have had recourse to opium extensively over a period of nearly twenty years, and have not known any ill effect. Patients are frequently sick in the morning after taking warm fluids, but this is rather salutary than otherwise … I had a clergyman, so impressed with the power of opium in controlling excitement, that, after he left this place, he kept a mixture by him at home, and had recourse to it when he felt irritable and losing the control of himself.’

Tonics and stimulants given by Dr. Wintle included ‘steel, quinine, liquor arsenicalis and creosote’. Wine and beer were also used, both alone and to disguise other preparations: ‘very frequently patients cannot be induced to take medicine, and then I have recourse to finesse, and give it in porter or beer.’

Patients with epilepsy were treated in asylums and opinions varied considerably on the treatment. At Hook Norton Asylum Mr Mallam tried several remedies: ‘In young and healthy subjects I employ drastic purgatives … occasionally setons in the neck [a seton is a thread or piece of tape drawn through a fold of skin to maintain an opening] … in weak cases, especially in females, I employ the mineral tonics … I deem it right to add that I have not found much success.’

Mr Mallam’s reference to purgatives brings us to one of the most common treatments, both of mental and of physical illness. Laxatives were given regularly, particularly strong doses being given in the asylums. The only early case book of the Radcliffe Infirmary which survives is for 1796. In it we find purging prescribed for patients with all kinds of ailments, including dyspepsia, swollen legs and pains in the stomach, hip and knee. The entry for William Ray, suffering from back pain, cough, sleeplessness and loss of appetite records that the ‘opening medicine has moved him 5 times’ – in twenty four hours.

The creation of blisters and the raising of the skin by the application of heated cups were common treatments, designed to produce a superficial effect in order to relieve a deeper irritation. Cupping to the head and neck were applied for mania, as the raising of blood to the surface was supposed to relieve problems in the brain. In 1796 Radcliffe Infirmary patients suffering from cough, stomach pains, palpitations of the heart and weakness of the arm were blistered. John Bryant was admitted suffering from giddiness and trembling. The first application of a blister ‘relieved his head’ but soon it was ‘slow and heavy’ again. Another blister was prescribed and two days later the notes record ‘The Blister has done its Duty – his Head swims a little upon any Exertion’.

Water treatments were common for many ailments. Showers of cold water were applied to the heads of the mentally ill to cool the brain. In due course the moral managers introduced warm baths for calming patients down, but the cold water treatment continued. At the Warneford Dr. Wintle advocated warm baths to help sleep and added ‘Cold bathing, especially the shower, is also very beneficial; is more to be used in the summer months but is frequently serviceable at all seasons, as a moral agent in patients who from indolence, perverseness or otherwise, persist in dirty habits.’

Warm and cold baths were employed by the Radcliffe Infirmary, again for treatment rather than for cleanliness. Patients were also sent to the Sea Bathing Infirmary at Margate, where they were dipped in the sea, wrapped in sea soaked sheets and drank hot or cold sea water. 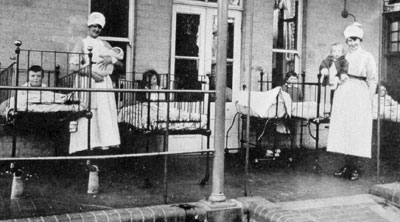 In the early years of this century treatment by means of exposure to fresh air became popular and balconies appeared on hospital wards, where patients slept whatever the weather. Pulmonary tuberculosis was treated by exposure to sunlight and fresh air. In 1916 a small wooden shelter for patients was built in the grounds of Brackley Cottage Hospital; it was on a turntable so that it could be rotated to catch the sun. The Committee minutes record requests from the Matron which give an idea of the conditions endured by patients in the shelter. A waterproof cloak and galoshes were requested for the nurses and eiderdowns for the patients. On at least two occasions parents removed their children from the shelter.

We should not lose sight of the fact that treatments which seem strange now were based on theories accepted as sound at the time. Sometimes the theories changed; blood letting, cupping and blistering continued from the earliest days into this century, but the reasons for them changed several times. Leeches are still used in medicine. Our predecessors were genuinely doing their best for the patients as we do today. If we were to visit an eighteenth century asylum we might say ‘What is this? The Dark Ages?’. In Star Trek IV that is Dr. McCoy’s verdict on one of our hospitals.