What do these have in common? No, this is not an essay on the British Army in the early nineteenth century; the answer is that all were instrumental in raising funds for Oxfordshire’s hospitals in the days before the NHS. Of course, fund raising is still part of hospital financing today, but before 1948 most of our hospitals depended almost entirely on the generosity of the public.

The principal source of money for most of the hospitals was the list of annual subscribers, whose generosity usually gave them the right to nominate patients for admission. This income was supplemented by other regular events and donations. Church collections were often given to the local hospital, and employees like the University Press would organize an employees’ hospital fund. Most hospitals held ‘pound days’ at intervals, when members of the public were encouraged to give a pound (or more) of produce to help the hospital. Considerable quantities of eggs, butter, jam, flour, soap, soda, sugar and cocoa were forthcoming as a result of these appeals. In Banbury in the 1930s local children were encouraged to join the Banbury Advertiser’s Fairy Sparkles Guild. Children who belonged to the Guild collected pennies and silver paper for the benefit of the Horton Hospital. There was an incentive: the parents of Guild members were charged a reduced fee if the child became a patient.

Most of the hospitals made use of their grounds and facilities to raise money. In 1772 the Radcliffe Infirmary made 5/- from charging for the use of their baths by persons other than patients; 6d was charged for a warm bath, 3d for cold. Kitchen waste could be sold for pig swill and hospitals which had gardens would sell off surplus produce. In the early years of the century the annual accounts of the Wingfield Convalescent Home (now the Nuffield Orthopaedic Centre) list the sale of pigs as a regular item. Those with extensive land at their disposal could be even more ambitious. The Warneford once owned all the land on which the Churchill and Park Hospitals, a small housing development and a student hall of residence now stand. Until the 1960s the hospital was able to run a small farm and a market garden. 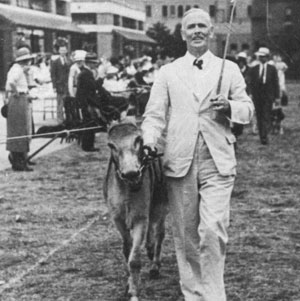 Once a prominent event in the social calendar, the annual hospital fete is the most obvious example of the regular event as a means of raising money. The proceeds of football and cricket matches, dances, sales of work and concerts were given to the local hospital. In 1928 a Mr Potts gave the ‘Banbury Guardian Homing Hospital Cup’ for an annual homing pigeon event with the combined aims of raising funds for the Horton Hospital and encouraging homing pigeons. In the 1870s concerts in aid of Brackley Cottage Hospital were given prominent coverage in the local papers. The performers were usually amateur musicians, and one or two of sufficient standing to be paid a fee. The concert on 9th March 1878 raised £20 for the hospital and was given 24 column inches of coverage in the Brackley Observer. Two of the songs were described in these terms: ‘the quartette “The Happiest Land”, was given with accuracy as to time and tune and with expression, and was thought by some of the ladies to be the piece of the evening. Those of the sterner sex, however, preferred, as why should they not, its successor “Lingering Voices”, in which Mrs Williamson and Miss Campbell made our old Hall a place “where music dwells, Lingering and wandering on as loath to die.” ‘

The accounts of all the hospitals show donations by individuals, usually voluntary, but occasionally imposed by others. It was a common practice for juries to give their fees to a hospital and in the 1780s the Radcliffe Infirmary was occasionally the beneficiary of fines imposed by the Vice Chancellor or other University and College officials. In 1877 the Infirmary received 13/9d for ‘wages forfeited by a Servant’, but we do not know whose servant or what he or she had done to forfeit the sum. Between 1812 and 1815 a G.F. Stratton managed to make £42 2s 8d for the Radcliffe from his work as a magistrate. Fines imposed for such offences as stealing apples or buying corn by illegal measure were handed over after the expenses of the conviction had been deducted. From these accounts we learn that a fine of two guineas was imposed on William Harris in 1812; he was overseer of the New Mill in Witney and was fined for an assault on one of the children under his care. We also discover that on 26th September 1808 Thomas Stow of Charlbury made a bet ‘that Bonaparte would Master of this Country in 5 years from now’. In 1813 the country was not ruled by Napoleon and he had to pay up; the Radcliffe Infirmary benefited from the wager to the tune of three guineas.

Occasionally the hospitals profited from special events which were not repeated from year to year. During the month of May 1929 Banbury shoppers were able to take part in the Blue Star Scheme; each trader who exhibited a blue star had agreed to give 4d from every pound taken in cash sales to the Horton Hospital. In 1907 Town and Gown co-operated on the Committee of the Oxford Historical Pageant, which was held from 27th June to 3rd July to raise funds for the Radcliffe Infirmary, Oxford Eye Hospital and other causes. Performances of the pageant took place before a grandstand built by the river at the end of the Broad Walk, all seats covered and available at 5/-, 10/6d and 21/-. Tickets were sold at offices in Oxford and London and reduced price railway tickets were available to those attending performances; a special train was run from Cambridge. Well known artists, writers and musicians were involved, including Laurence Housman, Robert Bridges, Laurence Binyon, Thomas Allen, Hubert Parry and Beerbohm Tree. Sixteen scenes of Oxford history and legend were presented in full costume, complete with horses, coaches and boats. In the following year the Pageant Committee gave £265 to the Infirmary.

One of the reasons for the advent of the NHS in 1948 was that hospitals were finding it more and more difficult to raise the money they needed. As time went by the lists of subscribers had reduced and formal organizations and schemes became the pattern. The Radcliffe Infirmary received donations and sheets from the Ladies’ Linen League, for example, and the activities of the Banbury and District Workpeoples Hospital Association raised £119,000 between 1910 and 1948.

In such organisations can be seen the origins of the work done by the Leagues of Friends. In 1920 the Radcliffe Infirmary started a Contributory Scheme whereby members of the public gave 2d a week; by 1923 the contributions were providing 60% of the Infirmary’s income. In the eighteenth and nineteenth centuries the money to run the hospitals came from the wealthier classes as an act of charity; most of them, if sick, would be treated at home. By the twentieth century the money was being raised by those who would benefit directly from the hospital. When trying to raise funds for the Oxford Lunatic Asylum (now the Warneford) in the 1820s the Committee looked to ‘that spirit of Liberality with which Public Charitable Establishments are encouraged’; by 1937 the Horton Hospital was approaching the public ‘as a Valued Friend might ask Your Aid that He might be Better Equipped, one day, to do You the Best of Good Turns’.