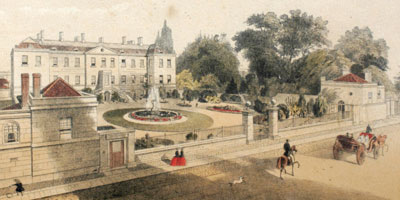 The first proposals to build a hospital for Oxford were made in 1758 at a meeting of the Radcliffe Trustees, who administered the estate of Dr. John Radcliffe (1650-1714), physician to Queen Anne. The sum of £4,000 was released for the new hospital, which was constructed on land given by Thomas Rowney, M.P. for Oxford 1722-1759.

The hospital opened on St. Luke’s Day (18th October) 1770. There were just two wards, male and female, but such was the demand by patients that another was opened by the end of the year and three more in October 1771. Such heavy use seems surprising to modern thinking, in view of the fact that many conditions were barred by the rules. Patients suffering from smallpox (or any infectious disease), epilepsy, ulcers, inoperable cancers, tuberculosis or dropsy were not admitted; neither were pregnant women, children under seven (except for major operations) or the mentally ill. Out patients were first admitted in 1835, and the separation of medical and surgical patients in the wards began in 1845. The rules on admission were relaxed during the nineteenth century and, where the Radcliffe still did not cater for particular conditions, it was often associated with the development of separate specialist hospitals.

On 27th January 1941 the first dose of penicillin was given intravenously to man at the Radcliffe Infirmary, and on 1st July that year the first accident service in Great Britain began. With the advent of the National Health Service in 1948 the Radcliffe Infirmary surrendered its independent status and became part of the United Oxford Hospitals, the Hospital Management Committee for Oxford. This continued until 1974, when responsibility passed to Oxfordshire Area Health Authority (Teaching) and then, in 1982, to Oxfordshire Health Authority. The Radcliffe Infirmary became an independent NHS Trust in 1993 and part of the Oxford Radcliffe Hospitals NHS Trust in 1999. The hospital closed in 2006 and the site is now being developed by the University of Oxford.

Records of the Radcliffe Infirmary

There may be information in the records of the United Oxford Hospitals, Oxfordshire Health Authority and Oxford Radcliffe Hospitals NHS Trust

The Radcliffe Infirmary is featured in these Tales from the Archives: