The doctor who didn’t believe in germs

A man is brought into the Radcliffe Infirmary after a fight with his wife and operated upon by one of the surgeons. The patient later dies, a post mortem is carried out and the Coroner holds an inquest, the jury bringing in a verdict of murder against the man’s wife. At the trial the surgeon is called upon to give evidence and the Judge is outraged. Why? Because the same man was surgeon, post mortem examiner and coroner.

Edward Law Hussey was elected as one of the Infirmary surgeons in 1850. He had a quick temper and was a great writer of letters of complaint; the minute books of the Infirmary are full of his complaints about surgical instruments, admission procedures, funding and bureaucracy. Dr. Palmer, house surgeon 1870-1874, said of him ‘Hussey was a very difficult man to get on with. He had the greatest contempt for anything new and would not adopt any new methods. His operations I always dreaded and usually had to finish. The stethoscope he called ‘the Wonder oracle’ and the hypodermic syringe ‘the Spike’.’

Frederick Symons, another of the honorary surgeons, was more willing to take new approaches and this led to differences between Symons and Hussey which continued for many years. The Infirmary rules required a consultation of all the surgeons before a major operation took place. Symons believed that the surgeon in charge of a patient should be solely responsible and his failure to consult led to a flood of correspondence. On one occasion Hussey published and circulated the letters, which action the Committee considered to be ‘a breach of the duty he owes to the Infirmary and much to be regretted’. On another occasion Hussey received notice of one of Symons operations and wrote to say that he held ‘a confident opinion that the disease will cease’ and suggested that Symons should tell the patient that one of the surgeons believed the operation to be unnecessary. Symons reply was: ‘I will take an opportunity to mention to the Patient your opinion. I only regret that I have to expose the ignorance of one of my colleagues. Hoping that you may gain more surgical wisdom.’

Hussey found it difficult to accept the use of antiseptics which Palmer began to introduce into the Infirmary in the 1870s. On one occasion Hussey complained to a committee that the hospital seemed to be ‘at the mercy of a young house surgeon who was doing his best to poison the patients with carbolic acid’. Hussey did not believe in germs; on one occasion he had to be prevented from placing accident victims in a ward with diphtheria.

In 1874 there was an outbreak of erysipelas at the Radcliffe and four patients died. The new house surgeon suggested that Hussey’s refusal to use antiseptics might have contributed to the outbreak. An independent enquiry was arranged and carried out by a Dr. Netten Radcliffe who made several suggestions, mostly concerned with limiting the spread of infection in the future. Hussey objected strongly to the intervention of ‘a stranger’, believing that the Infirmary rules required such investigations to be carried out by the medical staff and that Radcliffe had been biased: ‘Mr Radcliffe acted throughout as the servant of the Committee. I look on it as impossible that a Professional man of mature age, with ordinary powers of observation, could suppose that the enquiry he undertook had the countenance of the Medical Officers’.

In 1877 Hussey became City Coroner and had the misfortune to find that his first inquest was to be on one of his own patients, making him surgeon, post mortem examiner, coroner and witness. He believed that the only reasons which entitled him to appoint a deputy were illness or absence from Oxford and felt that he had no choice but to go ahead with the inquest.

Faced with public criticism by the Judge, the Committee of the Infirmary demanded that ‘Mr Hussey make his option as to which of the two offices of City Coroner and Surgeon to the Infirmary it may please him to retain’. Hussey replied: ‘I do not understand how the office of Coroner of the City is related to an office for the treatment of the sick or is incompatible with it. The duty of the Surgeon is at an end before the duty of the Coroner begins’. On receiving this reply the Committee considered a motion to dismiss Hussey, but eventually they gave him the chance to resign. When he did not the Committee arranged to elect a new surgeon.

Hussey believed that the Committee acted against the Infirmary rules in getting rid of him, citing motions and meetings without proper notice and a lack of attention to his letters. He claimed that the initial complaint about his holding of the two posts was brought by a former physician to the Infirmary of whom ‘I have heard that he had been known on former occasions to declare that he would never rest till I was turned out’. Hussey was not a member of the University and there is a strong feeling of town versus gown in his account of the Committee’s proceedings, as he records the words of several University men. It is clear that the Infirmary was taking the opportunity to get rid of a difficult and obstructive man, but it is hard to ignore parts of Hussey’s account: ‘A Member of the University, one of the Honorary Physicians of the Infirmary, the paid Officer of Health, and a Justice of the Peace talked of “incompatible offices”‘. Hussey also pointed out that another of the honorary surgeons was Coroner to the University but he had not been asked to resign. 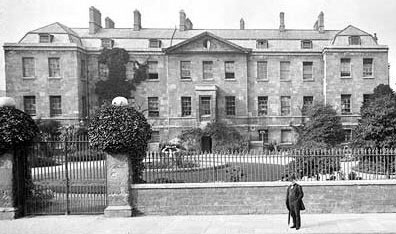 Hussey’s subsequent attitude to the Infirmary was to show how bitter he was about his treatment. Soon after he left he began to insist that the honorary surgeons attended inquests instead of the house surgeon, even though he himself had never been called in twenty eight years as an honorary surgeon. At that time the hospital was for the poor and the surgeons gave their services free, maintaining themselves through private practice. The house surgeon cared for the patients on a daily basis, but the honorary surgeons made the clinical decisions. The house surgeon was a paid officer and so did not lose income by attending an inquest which paid no fee. However, Hussey insisted that the surgeon in charge should be called, as ‘the House Surgeon may give an opinion that the death was caused by a course of treatment or an operation which he did not see, did not understand, or did not remember. He is not responsible for the treatment of the Patients.’

The culmination came when Horatio Symons, who had succeeded his father as an honorary surgeon, refused to attend an inquest and Hussey issued a warrant for his arrest. Symons started legal action and the Home Secretary had to arbitrate; he eventually decided that the attendance of the house surgeon was sufficient. In the meantime Hussey had sent a letter of apology for his ‘extreme measure’ and paid £20 towards the legal costs, which Symons gave to the Infirmary.

For the next sixteen years Hussey made use of every opportunity to complain about the Infirmary, particularly when he heard of deaths which had not been reported to him or when there was a delay in sending notice. On one occasion four staff at the Infirmary agreed as to the cause of a death and confirmed the opinion at a post mortem, but Hussey held that an inquest should be held. The relatives did not agree and took the body for burial. Hussey posted officers at the borders of his jurisdiction on Headington Hill to seize the body, but the family were warned and took a different route.

In fairness to Hussey it should be said that before his time the findings of the Coroner tended to be very vague, with such verdicts as ‘died before his time had come’. Hussey’s determination to pursue a full inquest and to establish the Coroner’s rights in post mortems laid down good principles for the future.

The last dispute between Hussey and the Infirmary arose in 1893, when the Committee objected to Hussey removing bodies to the City Mortuary for inquests. The Committee believed that it was only legal for Hussey to do so if a post mortem was to be carried out and they reported him to the Lord Chancellor. Hussey pointed out that he objected to the mortuary at the Infirmary, a ‘damp and unwholesome cell, sometimes crowded with other bodies, is not a fit place for necessary attendance of Jurors, not always persons familiar with such sights’. It is pleasant to record that for once an amicable agreement was reached, with a room being made available for the body and the Committee offering the Board Room for inquests. The entry in the minute book is in stark contrast to the exchanges of the previous forty years: ‘a letter from the Coroner was read expressing his hope that the Coroner’s work at the Infirmary might be done without unpleasantness during the remaining time of his tenure of the Office, a hope which the Vice Chairman had cordially reciprocated.’

Perhaps Hussey was growing tired of the struggles. He resigned as Coroner the following year, at the age of 78. He died five years later.